The Awakening of Souls in the Age of Global Madness

A year ago I was invited again by the Wiesbaden branch to a give a lecture and a seminar this May. The subject: Ahriman’s knowledge, from the point of view of Rudolf Steiner’s fourth mystery drama The Souls’ Awakening.
The closer the time approached, the more the subject seemed to fit the current world situation.
But obstacles were not lacking either. At almost the last moment, the event was cancelled by the authorities. At the very last moment, the federal state of Hesse suddenly allowed meetings of up to a hundred people in rooms, albeit with strict spacing regulations.
But would they let me cross the border? I spoke with German customs in Basel three times. The first official wanted to let me through on the basis of my written invitation, but only on the day I enquired, which was a Tuesday. Yet I wasn’t supposed to travel until Friday. To grant that, however, was beyond his competence. Instead, I was advised to call the customs office in Weil am Rhein. The advice there was to report to the Wiesbaden Health Department. I would to have to reckon on being quarantined for 14 days on arrival.
The next day I got a commuter certificate and had it signed by my hosts. The day after that, I enquired again at the Basel customs. The officer looked at me and said: You don’t look like you would be lying. He would have let me pass too, but it still wasn’t Friday. On Friday I confidently approached the third official, a stern-eyed woman. She checked my new certificate and said that unfortunately it didn’t help at all, since I wasn’t really a regular commuter. In the meantime, another invitation letter had arrived from Wiesbaden, this time with the previously missing telephone number. She was satisfied with this document and let me pass. What Kafkaesque chicanery!
I sat in the express train, very unpleasantly affected by the need to wear a mask, and put one on briefly, only to take it off again as soon as the conductor was out of sight. As the train was approaching Mannheim, where I had to change trains, a doctor asked the conductor which law this mask-wearing requirement was based on. In her helplessness she called the senior conductor and the two discussed what was to be done with the man. A fellow traveller wearing a mask called out loudly: “Throw him off the train”. Unperturbed, the doctor insisted on the law, arguing that each state had different regulations. Baden-Württemberg, which we had just crossed, only required masks to be worn on regional trains, not on inter-city express trains. The train driver was evidently not familiar with such fine details of the legal regulations, abandoned his tight authoritarian attitude and admitted in a low voice that he was not comfortable with the matter himself.
When the doctor said that he was looking forward to moving to Switzerland, I thanked him as I passed him on leaving the train for his little lesson in German law, but said that Switzerland had also long been on the road to becoming a sham democracy. On the way from Mannheim to Mainz, where a car was waiting to take me on to Wiesbaden, I immersed myself in the play The Captain of Köpenick, by Carl Zuckmayer. Weeks before, I had read the drama Ubu Roi by Alfred Jarry, the ‘Ur-Drama’ of Theatre of the Absurd. The legendary fake captain, who really did exist, one day decided to put an end to his social misery by buying a captain’s uniform, stopping a squad of soldiers marching past, taking charge of them and putting the Köpenick town hall ‘in order’ by arresting the mayor and finally seizing the municipal treasury. Then he drove off in a cab – and made the headlines, after which he was finally granted a passport, which he had long been denied due to his many years in prison.
But back to current reality: On the escalator at Mainz railway station, a complete stranger, a masked man pointed a finger at your Swiss traveller and barked: “Mask!”
Of course, hundreds of thousands, indeed millions of people have experienced similar and far worse absurdities, official harassment and private attacks. But we still seem to be lacking some determined captains who can put an end to the spook of the State’s masquerades.
Our greatest duty is not to put on a mask, but to unmask the globalist “philanthropic” guild of criminals who have put us all in this mess. 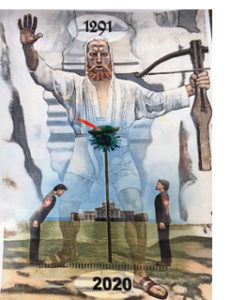 But wait: there is resistance to the excessive measures, as numerous appearances on YouTube by doctors, journalists and scientists have shown. To name just a few examples: a whistle-blower greatly embarrassed the German Ministry of the Interior by exposing its official incompetence and its violation of the law. Catholic bishops and cardinals and even an archbishop protested by issuing an open letter. And recently, a female member of the Italian parliament, in front of the camera, called on the Italian president to arrest Bill Gates. Up until now, Dornach has been content with “extremely politically correct” statements worth no more than wooden Michael swords.
But more and more people are also protesting publicly in Switzerland. A poster recalls the figure of William Tell and encourages people not to kneel in front of the corona hat. Not enough resistance?
Everything big starts with what first appears to be “small”. In relation to the current world situation: with the awakening of souls.