Beings of Lies and Truth

Nothing happens in the world one-sidedly.
R. Steiner

Rudolf Steiner once referred to “mendacity as the basic trait of public life in our time”. That was in August 1920. Today, almost a hundred years later, the truth of this statement cannot be moderated; on the contrary, this basic trait has in the meantime permeated everything – science, politics, spiritual strivings, etc., in short, our entire public life.
We do not need to say much about lying in politics. It pursues its aims mostly with power and pressure, and through the mainstream media. This is why especially countries with a vestige of freedom are being targeted. Like Switzerland. Are there still any Swiss in Switzerland? This is no chauvinist, patriotic question about being overwhelmed by foreigners.
It’s aimed at the weakening roots of the original notion of freedom in the former Swiss Confederation (Eidgenossenschaft). Are the so-called “framework conditions” advantageous for the EU or for Switzerland? See the analysis by Andreas Flörsheimer on p. 22.
In the EU mendacity may be becoming ever more apparent. Recently, on the basis of the latest research, a courageous Frenchman clearly demonstrated the un-European manner in which today’s EU emerged, namely, via the forces of the CIA and the Vatican, which could already be read in the final part of my biography of Ludwig Polzer-Hoditz, who inspired this present journal.1
Philippe de Villiers reveals some new connecting threads. Robert Schuman, who is revered – delusionally – as the ‘founding father’ of the EU, cultivated relations with the Pétain regime [Vichy], and his ‘founding brother’ Jean Monnet did the same with the CIA. The latter, according to Villiers, was not even the author of his own “Memoirs”, apart from their final passages. On 23 April, the birthday of Ludwig Polzer-Hoditz, the Swiss newspaper Zeit-Fragen [Zurich] “coincidentally” carried an interview with de Villiers which is worth reading.
Andreas Bracher, our colleague here at Der Europäer and The Present Age, who edited Polzer-Hoditz’s book Das Mysterium der europäischen Mitte [The Mystery of Middle Europe], is mentioned in Zeit-Fragen as someone “who has questioned the sacrosanct European ideology”.2 It is good that such connections have become visible in the uncovering of the most blatant lies! 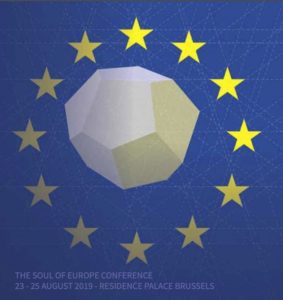 But what do today’s mainstream “Anthroposophers” say about today’s EU construct? They want to incorporate the pentagon-dodecahedron of the Foundation Stone into the EU’s 12-star symbol, which is demonstrably traceable to Catholic sources! This is the expression of their much hoped-for “Anthroposophical” spiritualisation of this political monstrosity, which from its very beginnings was doomed to failure – and to this end they are organising in August the 10th “Soul of Europe Conference”, this time in Brussels.3
To the darkening mendacity of our times belongs everything that has to do with the case of Julian Assange. If, after his arrest in London on 11 April, it comes to him being extradited to the United States through a prior agreement with the UK Home Office, we can expect one of the worst public show trials in modern history. The US dictators are likely to set an example with Assange that is directed against all liberal tendencies.

With regard to Der Europäer: Helmuth Zander, who cannot refrain from poking around in what he considers to be Anthroposophy, refers in a new publication to “insiders”, according to whom the monthly edition of our German language magazine, Der Europäer, supposedly does not exceed two to three hundred copies. They cheer too soon. In reality, the number is many times more than that: Zander’s insiders evidently are not to be found standing inside the truth.

From a spiritual perspective, the lord of lies is Ahriman. In his current incarnation he is drawing the forces of his subterranean lair (the sixth layer of the earth) up to the surface. This explains the ahrimanisation of all current earthly affairs.
Parallel to this, souls who are filled with the spirit of Michael bring a piece of heaven down to earth. These are the souls who know that the uncovering of lies is a powerful service to the truth. They know that in the end. ‘all lies have short legs’ [i.e. come to grief]. They also know that through the Mystery of Golgotha “the sting was already taken” from Ahriman’s activity once and for all, as Rudolf Steiner once said. With farsightedness then, no-one need to lose his balance because of ‘short-legged’ lies and fall into fear and terror.