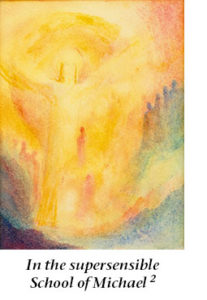 In her book Der Brief der Lehrerin (The Teacher’s Letter), written in her youth, Barbro Karlén says that at the age of 12 she had written that the human being goes through a schooling in an actual school in the spiritual world before birth. She describes life on earth as a great summer holiday from this supersensible school.

And as the principals of schools on earth give the students summer holidays to relax and do better in the next school year, “the highest teacher in the universe treats his children to summer holidays so that they can gather their strength before the final test! Summer holidays in which all feel free, in which all find time to think about their task. And if they did it well, should not they try to do it even better next time?”1

What the child Karlén, who at this early age had already had experiences of reincarnation, relates in this simple way, is profound and true. Not only has there been an actual supersensible school in the supersensible world since the beginning of the 15th century, the earthly vacation time is also rightly characterised by Karlén as the time “in which all feel free”. For freedom can only be gained and practised on earth! In this sense the “summer holidays” are the earthly school of freedom.

Rudolf Steiner’s modern spiritual research has cast a profound light on this supersensible school. Especially pregnant is what he says about it in the karma lectures of 1924, notably in Arnheim (GA 240). This school too has a great cosmic teacher – Michael, who of all the archangels stands the closest to Christ. The most important teaching content of the school is a far-reaching survey of the great Mystery Schools in human history, an imagination of the great “initiation teachings” (R. Steiner) of all ages.

Out of this review came a preview of the time in the future which was to bring about a new mystery wisdom. This time was the 20th century, and the initiate of the new mystery teachings was Rudolf Steiner.

All those who are drawn to the revelations of spiritual science thereby recognise that in their souls a mostly unconscious memory of their time in the Michael School can light up. Karlén became aware of this already in her youth.

But the present ahrimanic spirit in our time does not care for any such great and comprehensive survey of the past and the future. Ahriman is the inspirer of a narrow-minded intelligence, which does indeed achieve great things in very restricted fields but remains uncomprehending of anything beyond the limits set by academic sciences or falls into a vague mysticism.

Not so Michael. He calls for a comprehensive, wide-ranging thinking that includes both sensory and supersensible realities. The new mystery teachings can only be grasped through such a spiritualised thinking.

Just as in the summer holidays much that was learned and experienced at school is forgotten and must be forgotten, so most people completely forget what they have experienced in the supersensible school. Many have drunk so deeply from Lethe’s draught of forgetfulness that everything of a supersensible nature that they have received appears to be extinguished in them. The most effective means of refreshing the memory of our pre-birth experiences is the earnest study of spiritual science

The new Age of Michael began 140 years ago in the year 1879.
On 19 February 2019 we will be exactly 120 years after the end of Kali Yuga, which called for the acquisition of knowledge of the world of the senses and which ended on 19 February 1899, to be followed by an Age of Light.