Marx, Steiner and the Euro-Statue in Brussels

Karl Marx (1812–1883) wrote his “Communist Manifesto” in a café on the Great Square (la Grand Place) in Brussels in 1847. We pointed out the karmic background of Marx in the June issue of TPA. Marx had developed his basic ideas out of his past life experiences.
How different it was with Rudolf Steiner! His Kernpunkte der sozialen Frage (published in English as: Towards Social Renewal) which calls for social threefolding was derived from the path of destiny of the whole of modern western humanity and merely states that which is seeking to forge a new social path.
The book was intended for everyone who had an unprejudiced view of the contemporary situation. Even a man like Mussolini recognised its value, even if too late (see the article on p. 9). Countess Johanna Keyserlingk shows in a previously unpublished fragment how far understanding for the essential ideas contained in Steiner’s book and for threefolding was also growing in the USA. 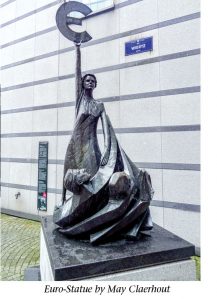 Near the entrance to the EU Parliament building in Brussels stands a Euro-statue with a telling message: a hard-looking, lean woman holds up the symbol of the Euro, and below her is a man who, according to an eye-witness view by the Christian Community priest Mathijs van Alstein, has the features of Rudolf Steiner!1 Is this the expression of a spiritual struggle in the 20th and 21st centuries? Mammon versus a really new social order?
Whether the face of the male in the statue resembles Steiner or not, he too spent some time in Brussels and there discovered the work of the very significant visionary painter Antoine Wiertz (1806–1865). The Euro-goddess could have alighted from Wiertz’s “La révolte des Enfers contre le Ciel [The Revolt of Hell against Heaven]. The plaque of “rue Wiertz” right behind her on the wall, the Wiertz Museum opposite the EU Parliament building! What a language of contrasts!2
It is time the Euro-goddess returned to the same underworld from which she arose and left the prospect free for Steiner’s practical Utopia, which will outlast both Marx and the dreams of the Brussels globalists.

1    See his striking essay “Besinnung in Brüssel”, in Die Christengemeinschaft 5/2018.