Human Indignity, Karl Marx and the Spiritual Challenge of Getting Beyond the Dollar 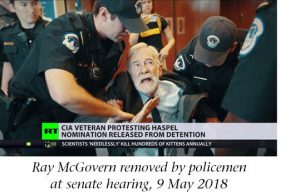 There was a shocking scene during the public senate hearing in the USA in early May on the nomination of Gina Haspel as the new Director of the CIA. It is known that Haspel was involved in the waterboarding torture of terrorist suspects in a prison in Thailand, but she herself classified documents about her own part in this. When Ray McGovern, a former CIA analyst who has become a whistle blower, and also appears regularly on Russia Today, asked about her activities in Thailand, he was brutally interrupted, dragged to the floor and pulled out of the room. A pitiful scene, demonstrating that “democracy” may immediately be abrogated the minute the ‘wrong questions’ are asked… 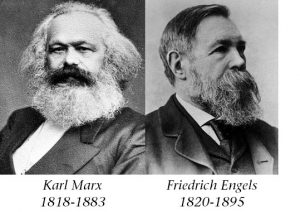 On 5 May we remembered the 200th anniversary of the birth of Karl Marx, the most influential father of modern thought on the subjects of labour, property, capital etc.
What is less known, is the karmic background of this pioneer of economic and social theories. From his spiritual research, Rudolf Steiner revealed that Marx was a landowner in Northern France in the early 9th century, and that one day his property was seized by a rival. Marx was then forced to work under the new owner of his former property. The new owner reincarnated as Friedrich Engels, who embarked on a compensatory cooperation with his former rival.
Thus old impulses of destiny may work on in a new incarnation. No wonder that Marx became a fierce enemy of all private property, having himself experienced in a previous life how insecure the private ownership of property can become. Those seeking deeper insight into this historic-karmic background of Marx and Engels and their activities are referred to Steiner’s lecture of 6 April 1924. [GA 236].

Beijing launched its yuan-denominated crude oil futures in Shanghai on 26 March, with the aim of challenging the US dollar, the predominant settlement currency for oil contracts. This challenge is healthy but should be accompanied by a more spiritual understanding of the basic concepts of Marxism. TPA has published leading articles in this direction, mainly by the Swiss banker Alexander Caspar. Thinking has to be developed into three higher modes of cognition. Abstract thought alone cannot even understand the fluid nature (within the spectrum of production, distribution and consumption) of economic goods. Here the faculty of real imagination is required. Even more difficult for modern abstract and materialistic thinking is to grasp the essence of what work or labour really is; this requires inspiration. And capital, the most spiritual of all, can only be adequately comprehended by real intuition.2
Without such a widening of the horizon of understanding, materialism and world domination by the power of capital will remain – even after the challenge and overthrow of the dollar.

1    ‘The Veiled Power of Money’ appeared in TPA Vol. 4 No.1, April 2018, amongst a number of other articles by the same author in earlier volumes of TPA.