Terror, Lies and Truth Conference – Reactions to the Conference

The Basel event of 3 March at the Scala in Basel has proved to be something of a barometer of the climate of public opinion in relation to key events of the last few years and decades. We have already reported on the fact that in the run-up to the sold-out conference a journalistic ‘execution’ of the event was attempted in some regional tabloids in northern Switzerland.
Following the conference, on 11 March, the Swiss Sonntags-Zeitung presented a pièce de résistance of unfactual reporting about it that teemed with untruths. The title of this double-sided onslaught was: “When everything has to do with everything else – Daniele Ganser, Ken Jebsen and other conspiracy theorists meet in Basel – at the invitation of Anthroposophers. The background”. 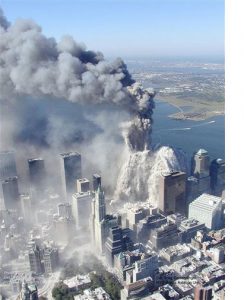 This is exactly what the Sonntags scribblers practise: they mix everything up with everything else by throwing all kinds of theories together in a double page box spread, as if, at the conference, only one of them had been: according to David Icke, Obama is actually supposed to be a lizard – Pizzagate, anti-vaccination campaigners, Chemtrails, the Protocols of the Elders of Zion etc. etc. But wait: 9/11 can’t be left out of course – “it wasn’t done by Al Qaida (…) a nearby building (…) collapsed so rapidly that it must have been blown up. Videos of Osama bin Laden were faked.” Instead of posing questions about this event to the Scala Conference even from a distance, which would have been a journalist’s duty, a few sentences about 9/11 were thrown into a jumble of things which had not the slightest to do with the conference and were immediately scorned and dismissed as “conspiracy theories.”
The most grotesque thing was a photo that covered nearly two pages, a third of the whole two-page spread: the Twin Towers after the attack, with gigantic pillars of smoke, the like of which previously one had only known from atomic explosions or volcanic eruptions. The cause of this was two aeroplane attacks? What we see in the photograph speaks loudly of very different explanations… But the blind and the deaf see and hear nothing.

Worse, if no less predictable than such pitiable reporting, is the attitude of a section of the anthroposophical Press. In his disinformation paper, Herr Heisterkamp [editor of Info3 – Ed.] called the Basel event “a summit of authors well-known on the scene, who share the view that the Islamist attacks were deliberate acts of terror by the State”. Not a scintilla of an idea about how far this view might actually be justified.
Against Ken Jebsen he makes the same “reasoned” attack, only with slogans and distortions, that the spokesperson of the Federation of German Waldorf Schools, Henning Kullak-Ublick, made against him in July 2015, when he warned against the appearance of the former Waldorf pupil Jebsen (and later also of Ganser and other “conspiracy theorists”) at Waldorf Schools – a shameful blot on the free spiritual life, which these very schools were supposed to serve!1
Since the Basel conference the internal opposition to a free spiritual life within the anthroposophical movement, an opposition which is held in fearful check by the mainstream media, has again gained the upper hand: a follow-up event to the packed Basel conference was planned and already announced as due to take place at the Schopfheim Waldorf School but it has been called off – with reference to the same statement by Kullak-Ublick on behalf of the Federation of Waldorf Schools! Our anthroposophical barometer is showing a “deep depression”, i.e. a “storm” in the free spiritual life!