Our sick financial system and its healing 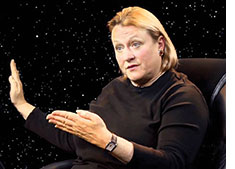 After a recent encounter with Catherine Austin Fitts in Basel who did an earlier interview1 with the chief editor of The Present Age, he decided to ask her for a short interview for this issue. This will be published instead of the usual editorial, but it will surely be of no less interest for our readers!

THM: You wrote the book “Dillon, Read & Co. Inc. and the Aristocracy of Stock Profits”2. What made you write it?
CAF: I made the decision to write this book in the middle of a vegetable garden in Montana during the summer of 2005.
I had come to Montana to develop a venture capital model to support a healthier, fresher local food supply. If we want clean water, fresh food, sustainable infrastructure, and healthy communities, we are going to have to finance and govern these resources ourselves. We cannot invest in the stocks and bonds of large corporations, banks and governments that are harming our food, water, environment and all living things and then expect these resources to be available when we need them.
What I discovered, however, was that many of the people who needed to create and support such an effort continued to support and finance the growing corruption. I wanted to create a “case study” that would help them understand the nature and extent of the corruption in the hopes that such insight would inspire them to shift their time, attention and resources to invest in real solutions.

TM: There is an intro video to your book in which you speak about the discrepancy between what you call the “Popsicle index” and the Dow Jones Index. Can you briefly illuminate our readers?
CAF: I developed the notion of the Popsicle Index when I worked as Assistant Secretary of Housing in the first Bush Administration. I was being lobbied by business interests who wanted me to make decisions that would cause their stocks to go up. I realized that many of the things that made their stock go up would cause the deterioration of family income and wealth, and with it the deterioration of community health and well being. I wanted an “index” that would capture that wealth – the wealth of places.
The Popsicle Index expresses the percentage of people within a place who believe that a child can leave their home, go to the nearest place to buy a Popsicle (an ice cream on a stick) and come home alone safely. I have found that there is a direct correlation between the Popsicle Index and the social, environmental and economic health of a place. High trust results from places that work successfully for humans and living things.
I used the Popsicle Index to express the relationship between living assets and financial assets. I believe that if we financed places with equity, the inverse correlation that has existed between the Dow Jones Index (financial equity) and the Popsicle Index (living equity) could be transformed to an aligned correlation.

THM: What are the main characteristics of the present financial system dominated by the globalists?
CAF: The globalists are centralizing power and will continue to do so until they have eliminated human and property rights and individual sovereignty or are prevented from doing so.

THM: Some wizard designed a dollar note on which we read IN FRAUD WE TRUST instead of IN GOD WE TRUST. Is this the ruling “moral” principle in the present financial world?
CAF: Perhaps it should be IN VIOLENCE WE TRUST. The dollar as reserve currency is increasingly reliant on force to maintain its status.

THM: What do you think of the present Trump administration and its policies?
CAF: Trump’s election represented a productivity backlash. The Democrats represented the vested interests on the East and West Coast – Hollywood, Silicon Valley, Wall Street and Washington. These are all groups that deal with intellectual capital. The heartland contains the people who grow the food, drill for the oil, and run transportation and manufacturing. They deal with the concrete world. The heartland was disgusted with the cultural fascism and the pile on of surveillance, rules and regulations and financial fraud from the coastal groups. The extraordinary corruption of the Clintons and the Clinton Foundation became the poster child for their disgust. Hence, a person who had no formal experience in government endeared himself to the American people by openly speaking about what is really harming IN Americans’ time and resources – such as vaccines, Common Core curriculum, the failure of accountability on 9-11, and fake news media.

THM: What was and is the role of the dismissed main strategist Steve Bannon? He bragged with phrases like “Darkness is good” or “I am a Leninist” or “Satan, that means power”. Is this an expression of an extreme lust for power?
CAF: I don’t know Steve Bannon. I believe he tried to speak to the importance of rebuilding domestic health and productivity and withdrawal from engaging in regime change and violations of international law globally. It looks like Trump and Bannon struggled with how to do that given the challenges of managing the reserve currency, multiple global constituencies and the problems with the budget, including the black budget and many trillions that have been shifted out of the government balance sheet illegally.

THM: What about the new sanctions against Russia3. What will they lead to?
CAF: The Neocons and their allies globally want war. Hopefully there are enough cool heads to prevent such a war.

THM: Where do you see the role Europe could play in the near future? Should the Europeans just leave NATO, which has become a machine preparing for war and threatening Russia and the rest of the world?

CAF: Any ally who ties themselves to the United States in a manner that permits the US to declare war and drag them into it, will regret it. I recommend Malcolm Fraser’s interview on his book Dangerous Allies before he died: https://www.youtube.com/watch?v=9F69baWypks&feature=youtu.be
The United States is a wonderful country. However, we have a relatively small group – the Neocons – with a small number of violent allies, including Israel, who are prepared to destroy both the United States and Europe to get their way.
The healthy thing is to separate, disengage, shun. The question is can we get rid of the parasite without killing the host. One way or another we will have to figure out how to do so or the parasite will kill the host.

THM: You have just read the book by the former Greek finance minister Varoufakis. Why should it be read?
CAF: This is an excellent account of the European Union’s economic strategies in Greece when Varoufakis covered them and then served as finance minister. I strongly recommend his book – Adults in the Room: My Battle with Europe’s Deep Establishment.

His report proves to me that the goal of the European Union was to reduce Greece to poverty. This was elites engineering a financial coup d’état – invasion and subjugation by economic means. The European Union leadership was committed to a win-lose result. They did not want Greece to succeed, let alone to be able to pay back loans. Debt is a weapon, not a financial asset. The goal is control and social engineering – including lower life expectancies and depopulation.
It is hard to fathom the truth. Varoufakis provides significant detail and comprehensive economic analysis that cuts through the lies, spin and fake news for those who can handle the truth.