How Far-sighted Should We Become? 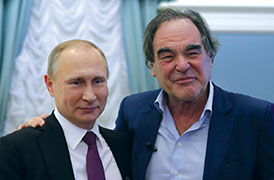 Oliver Stone’s interviews with Vladimir Putin
Oliver Stone (b.1946), the well-known American producer and film director, who recently made a film about Edgar Snowden, has undertaken, for more than two years, a series of interviews with President Putin. It is truly remarkable in many ways and can be downloaded at no cost1. Putin obviously feels free to speak with an intelligent partner who has no bias or political ambition. The panorama of topics is impressive: it encompasses the wars in Syria, Chechnya, right up to the assertions of hacking and the demonisation of Russia. Key are some statements to the coup d’état in Kiev and the incident with the destroyer USS Donald Cook near Sebastopol.
Putin confirms that after 1989 NATO assured his country that there were no plans for eastward expansion. And as he already did during his famous Munich speech in 2007, he openly questions the existence of NATO. He also mentions that Russia even proposed to President Clinton that it should join NATO, if the organisation was not to be dissolved. Clinton replied: “Why not?” But of course, these remained no more than nice words. Another key topic is the new arms race – the US spends about USD 600 billion per annum on its military, Russia “only” USD 60 billion. The US cancelled the ABM contract in 1991, heightening the danger of a nuclear confrontation.
One of the surprising features is the discipline with which Putin listens, the concreteness of his answers as well as the ongoing openness with international partners that have shown more than once that their word cannot be always trusted. He has however a keen eye for the blindness and the illusions of a superpower which cannot sacrifice some of its privileges. He prepares for the worst and hopes for the best.
One of Putin’s recurring statements is that we should always try to imagine the future and look at least 30 to 50 years ahead. It is clear that this is truly his mentality and that he is beyond the usual limited horizons that result from the short-sighted interests and turmoil of elections and party politics.
Appreciating Stone’s courageous initiative, he says to him at the end: “You are going to suffer for what you are doing” [with this interview]. No wonder that the corporate media try to play down the significance of these interviews, calling them mere Putin propaganda and worse. Thus the Swiss newspaper the Neue Zürcher Zeitung on June 17: “There are jovial conversations in which Stone figures as a stooge, so that Putin can put forward his propaganda.” May our readers judge for themselves.

Oliver Stone and the Kennedy assassination
Stone is, in the good sense, no blank page. He has already several times provided proof of his sense for behind-the-scenes political realities, above all perhaps in the movie JFK, first shown in 1991. The film was based on the investigations of the courageous district attorney from New Orleans, Jim Garrison, who even has a small role in the film as United States Supreme Court Chief Justice Earl Warren, the head of the commission that investigated the assassination in the 1960s. Garrison made clear that the notion that Lee Harvey Oswald was the lone assassin, spread by the Warren Report after Kennedy’s assassination, was nothing other than a useless “conspiracy theory”. As mentioned before in this magazine, the poisonous term “conspiracy theorists” is an invention of leading members of the Warren commission and turns up in a CIA dispatch of April 1967 2. With this movie, Stone belongs to the whistle-blowers who have prompted new research and publications on the famous assassination, of which the excellent book by James W. Douglass, JFK or the Unspeakable3 seems to be the latest one.
No doubt Putin and his team carefully considered Stone’s background and his works before consenting to meet him for these interviews.

Former CIA agent as new 9/11 whistle-blower
As for important whistle-blowers, another one who recently spoke out about the controlled demolition of Building 7 on 11 September 2001 is the “retired 79 year-old former CIA agent Malcom Howard, [who] has made a series of astonishing claims since being released from hospital in New Jersey and told he has weeks to live. Mr. Howard claims he was involved in the “controlled demolition” of World Trade Center 7, the third building that was destroyed on 9/11”4. It is worth watching the documentation of this new truth witness lining up just after Michael Ketcham spoke out about the demolition of the same building a few months ago (see TPA Vol. 3 No. 1 April 2017).

Geopolitical tendencies for centuries ahead
It is good to try to see 50 years ahead. Deeper understanding of contemporary events urges us to see even further. Rudolf Steiner spoke of an occult group within the Anglo-American establishment that seeks to dominate the young Slavic cultural seed growing on Russian territory5. This occult group knows that the Slavic epoch is to begin in about 1500 years. “Occult” in this context means that this group works with some occult knowledge of the future development of races and peoples – and tries to make use of this knowledge in a group-egoistical sense, to favour uniquely the development of the Anglo-American cause. This knowledge was and still is in the background of the geopolitical conflict in the Ukraine to name but one example. To take this knowledge seriously implies to take the spiritual and its realities seriously.
There is in fact no true far-sightedness without, in the last resort, taking into account the reality of the spirit.

5    See p. 6 of this issue and also, at www.perseus.ch, the German original (Kampf um den russischen Kulturkeim) and the English translation of this key statement (“A Fundamental Indication by Rudolf Steiner, with Relevance to Present-Day Global Politics”) which is part of a diary entry of Steiner’s.