Sweet Freemasonry – an “Appreciation” in the Weltwoche 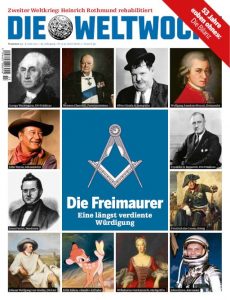 birthday on 24 June – and the Swiss weekly Die Weltwoche added its voice to the celebrations.
The occasion: the day of the founding in 1717 of the first Grand Lodge in London (see the editorial in the June issue). The cover page with the issue title “The Freemasons”, surrounded by prominent heads, shows the square and compasses and promises “a long deserved appreciation”.
The article “Humanity, Tolerance, Freedom” by the chief editor Köppel drips with benevolence, praise and slogans. Some of the most significant Freemasons have been, as is well-known, people like Mozart, Haydn, Goethe, or Schiller, but also statesmen like Winston Churchill. All the personalities mentioned are indiscriminately covered with the gloss of truth and goodness. We even learn that we owe exquisite chocolate to Freemasonry, for Suchard and Tobler were Freemasons. O sweet naivete!
Die Weltwoche presents an inside view of the lodge “Zum Neuen Venedig” [New Venice]. This is situated directly opposite the Jesuits’ residential hostel “Borromäum” on the Byfangweg in Basel. Over a hundred years ago the Jesuit Abbé Joye established a pastoral care centre for young people, which purposefully installed the new medium of film. Anyone who believes that Freemasonry and Jesuit endeavours are absolute opposites, errs.

Steiner and Heise defamed
Rudolf Steiner already drew attention to the fact that Freemasonry was originally something good and necessary, but that it “simply becomes something bad when it is made into a power base for particular groups of people”. He wrote this in a Foreword that he contributed to a book which had as its object exactly this “retrogression” of Freemasonry at the time of the First World War. This was Die Entente-Freimaurerei und der Weltkrieg [Entente-Freemasonry and the World War] by the writer Karl Heise (1872–1939).
Meanwhile, continental Freemasonry, which had been founded from England, was increasingly dragged along in the wake of political and nationalist interests. This happened most clearly in the case of the “Grand Orient de France”, which since the 1880s has even accepted atheists.
Heise died before the outbreak of the Second World War; he did not always clearly judge the development of National Socialism. That his analyses were reviewed positively in the Völkischer Beobachter and thought well of by leading National Socialists like Himmler, is not a reason to accuse him, still less Steiner. But Die Weltwoche (in the article by Christoph Mörgeli) does not shy away from castigating Heise in general and Steiner with him as well – two birds with one stone, which of course cannot do without the slogan of conspiracy theory: “In 1919 a sensation was caused by the esoteric conspiracy theory book Die Entente-Freimaurerei und der Weltkrieg by Karl Heise, later a National Socialist. The Anthroposopher Rudolf Steiner had written a foreword to it and helped finance it.” In such a simplistic way Heise’s book is defamed and Anthroposophy at the same time is associated with National Socialism.                                                                                                                  No-one understands or presents the high origins of Freemasonry like Steiner; no-one else uncompromisingly diagnoses Freemasonry’s deviation from those high origins.
The superficial gushing praise of the Weltwoche shows that Steiner‘s diagnosis is still correct today. The sweet, clichéd whitewash deceives only the naive – and they can even sit as Freemasons – or would-be Freemasons – in chief editors’ offices and regard their whitewash as “humanity, tolerance and freedom”. But we can also be grateful to the chief editor and his team: we now know, from an authoritative source, which sworn oaths are enjoying a boom in Switzerland today. Oaths to truthfulness they certainly are not.
The long-deserved appreciation of that connoisseur of Freemasonry, Rudolf Steiner, is yet to be seen.

2   The book appeared in Basel in 1919. Steiner paid 3000 SFr towards the printing costs. The book’s very proper subtitle was “A Contribution to the History of the World War and to the Understanding of True Freemasonry“. Heise had heard Steiner’s Zeitgeschichtliche Betrachtungen lectures [published in English as The Karma of Untruthfulness], which had inspired him to write his book. His book went through several reprintings and can today be found online.

At the Historical Museum in Bern until 3 September an exhibition is being held in which a Freemasonic ritual is shown.