Rudolf Steiner clearly distinguished between a Freemasonry with high, universally human aims and one with particular political interests.
For the first kind one may look at the rituals for the first three grades renewed by Rudolf Steiner. Of the second type he said: “An affair which ought to serve the whole of mankind without distinction of race or [special] interests, becomes transformed from something good into something bad, when it is made into the foundation of power for particular groups of people.” These words appear in the Foreword, which Steiner contributed to the publication of Die Entente-Freimaurerei und Weltkrieg [Entente Freemasonry and the World War] by Karl Heise in October 1918.
Since the First World War it has been almost only this latter form of Masonry that has been propagated and  – effective. It originated in England, where at St. John’s [24 June] in 1717 the first London Grand Lodge was founded, which itself was of the first form mentioned above. However, the lodge foundations which stemmed from Grand Lodge increasingly took on  a political colouring throughout Europe. This was especially the case with the Paris Grand Orient de France, founded from London, the war policy of which moved Steiner to tear up the certificate that empowered him to conduct his own rituals.
In 1917 8000 Masons gathered in the Albert Hall in London to celebrate the 200th anniversary of the founding of Grand Lodge; in the same Albert Hall, in which the high grade Mason Winston Churchill would outline in 1947 the real aim of the unification of Europe that he was advocating: the establishment of an Anglo-American world government. This year the 300th anniversary was commemorated already in April.
A more important anniversary: in June it will be exactly a hundred years since Steiner spoke for the first time of threefolding (More details in the July issue).

The contemporary relevance of the Grand Orient 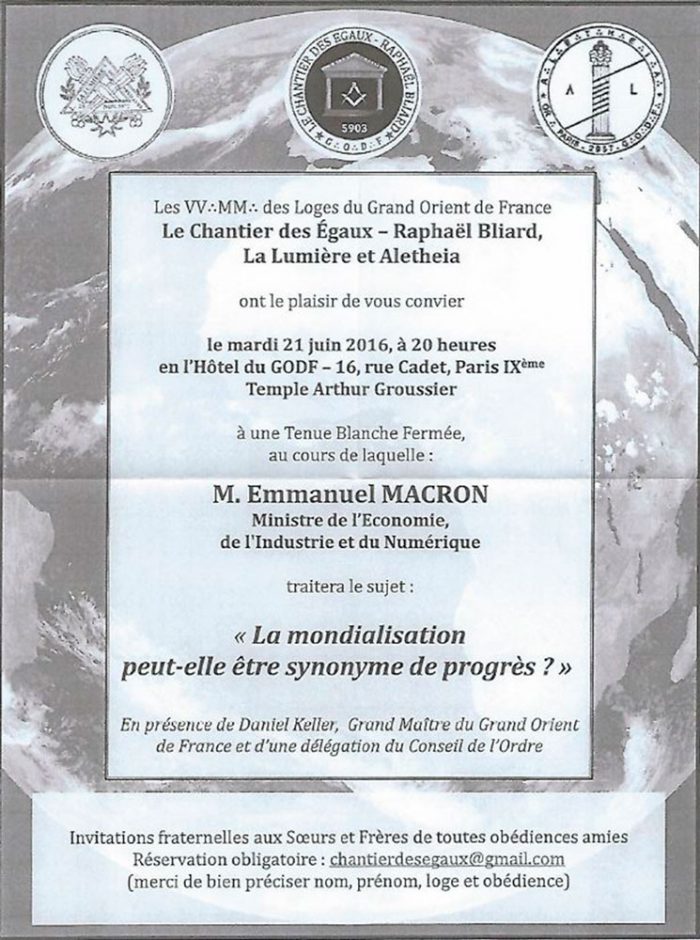 A year ago, the French President Macron, who has appeared as though out of nowhere, held a lecture under the auspices of the Grand Orient, a kind of inaugural speech, with the title “La Mondialisation peut-elle être synonyme de progress”? [Globalisation – Can It Be Synonymous with Progress?] A rhetorical question, which in reality promotes globalisation. Macron’s banal EU propaganda serves the global interests of the banking world and has nothing to do with the real needs of Europeans. 100 years after the birth of the idea of threefolding, President Macron, in the name of Europe, and with an EU fanfare that misused  the  Ode to Joy, set to music by Beethoven, promoted globalisation – a total caricature of threefolding, which neither strives for fraternity in the economy , equality in law and certainly not liberty in the cultural life. It is no accident that Macron has declared war on Russia Today, the only broadcaster which knows how to resist the western media monopoly successfully. Real Europeans will ultimately have to decide to pursue a policy of wide-ranging viewpoints, as Steiner developed in the Memoranda of July 1917. Otherwise, they will finally succumb to the machinations of political Masonic circles, which certainly do reckon with grand perspectives, but which continuously seek to use these “for the foundation of power for particular groups of people.