Phantoms of Untruthfulness and the Salt of Truth

By “phantoms of untruthfulness” [Lügen-Phantome] spiritual science understands a kind of “nature being” which is created by human beings – by human lies, hypocrisy and the like – even by so-called conventional or polite lies.1 Such beings fly about in the soul world and block development, notably by beguiling and befogging the sense for truth, and creating new lies.

The 20th century will perhaps one day be called the century of phantoms, for its course was paved with colossal lies like no other before it: the lies about the First World War (the war guilt lie) and the Second World War (the “surprise attack” by the Japanese at Pearl Harbor) have often been discussed in this magazine. Almost as often has been discussion of monumental lies with which the third millennium began: the lies that immediately surrounded the murderous events of 11 September 2001. As the Twin Towers collapsed in New York, gigantic towers of lies immediately shot up into the heights.

Every truth-seeker who tries to uncover the established lies comes into the field of vision of the above-mentioned beings. They defend themselves vehemently against every effort to find the truth. Today they are frequently active against the uncovering of the truth by making indiscriminate use of the deceitful slogan: “conspiracy theory”.2

This is their nature. It can have a discouraging and confusing effect, which is why the truth today has to be fought for by overcoming the resistance of such beings. Only in this way can they be liberated from their mendacious spell.

From a recent example in Switzerland one could see how the media today are permeated by an atmosphere of lies. In a TV broadcast the historian and truth-seeker Daniele Ganser was reviled, slandered and, amongst other things, associated with fabricated documents such as the “Protocols of the Elders of Zion”3. A good sign of the thinking capacity of 492 uninhibited respondents who immediately reacted was the following: “There have never been so many complaints [to the broadcaster, SRF]”, reported the Basler Zeitung newspaper [BAZ] on 18 March.

In the Basler Zeitung magazine one could read with regard to 9/11 and conspiracy theories, almost at the same time: “Everything I trust tells me that the events unfolded as I had always accepted they had: as a terrorist attack by al Qaida (…) Of course I can’t prove it. I simply have too little a sense of it.4” There speaks a mind which, confused by mendacious phantoms, has given up searching for the truth.
Again, almost at the same time as this article, Michael Ketcham, a long-time employee at NIST, revealed to the public the complete phantom nature of the report by these official investigative authorities on the collapse of the towers in New York.5 Here again one man in the midst of a gigantic tower of lies, which had almost buried him, suddenly woke up. Ketcham speaks of a widespread paralysis caused by fear of the truth. One day he was cured of it and transformed himself into a fearless advocate of the truth – a continually recurring phenomenon seen in individual Americans, in striking contrast to the intensive effects of the phantoms in their own homeland.

Ketcham also speaks of the “wounds of 9/11” and 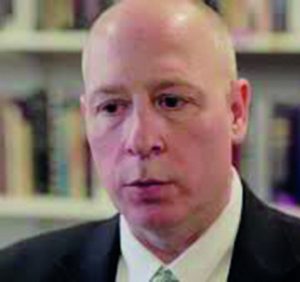 emphasises that they were so traumatic that only a strong painful remedy will serve to heal them – the unvarnished truth: “Truth is the hot [alkali salt retentive] soap water which will wash clean the wounds of 9/11.” Let us never forget: the 9/11 phantoms served as the mendacious excuse for all the US wars thus far in the third millennium. They therefore had a huge effect.
Hippocrates recommended the use of anti-inflammatory saltwater for wounds.  Whoever wants to prevent the damage caused by the inflammatory and infectious effects of phantoms should not shrink from rubbing the salt of truth into the wounds that are lies. It hurts – but heals.

1     See the lecture by R. Steiner of 9 June 1908 in GA 98, published also as a single edition in Pfingsten, das Fest der freien Individualität.

3    We have often drawn attention to the CIA origins of this phrase that followed the assassination of President Kennedy. – G.W. Bush, whose father had been the head of the CIA, said soon after 9/11: “Let us never tolerate outrageous conspiracy theories concerning the attacks of September 11th.”