Trump – servant of America or humanity?

The name of the 45th President of the United States is Donald Trump. Trump’s inauguration speech1 was like a slap in the face for the US Establishment and the  US media, and was at the same time a verbal homage to the true sovereign – the American people, buttressed by the usual consciousness of the ‘chosenness’ of  the USA and its mission in the world. “America first”, “We will make America great again” were the often heard and applauded slogans.

A relevant indication by Steiner about the spirit of North America
The “God” invoked in many past inauguration speeches and also in that of Trump  cannot at any rate be equated with a God for the whole of mankind. He is a national God [Volksgott], who in  the age of Michael, the spirit of humanity, is an ahrimanic spirit, in contradistinction to Michael. He belongs to the “abnormal Spirits of Personality”, “who do not act for further development”, as Steiner carefully indicated in the Folk Souls cycle in 1910: “You only need study the character of the North American people; there you have a people that for the time being is based on this principle.”2 Real “further development” today is needed especially in the spiritual and cultural sphere; and of that there was certainly no mention in Trump’s speech. Externally, it may be worth building new roads, trains and tunnels; in a comprehensive sense, they can only serve “further development” indirectly at most. 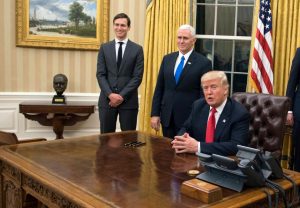 y did he – to throw up only a few of the many questions about his administration’s intentions – nominate Nikki Haley for UN ambassador, who speaks up for Israel’s interests but against those of Russia? Why was his  first (jovial and friendly) visit as US President to the headquarters of the CIA, where he praised the 400 staff present for their work and assured them of his unlimited support? Why will the British Prime Minister Theresa May, who certainly does not share Trump’s pro-Russian views, be the first official visitor from abroad?  Does he intend by all this only to take the wind out of the sails of his internal and external opponents?

In the spirit of Churchill?
Trump has had the bust of Churchill – a gift from Tony Blair to G.W. Bush, and which Obama had had removed – returned to the Oval Office (see photo). The high-ranking Freemason Churchill, whom Trump admires, did not serve the true Time Spirit, but the Anglo-American spirit of “effective World  Super-Government”, for which the unification of Europe represents merely  a prelude3. Europe today is like the sinking Titanic, and the British have just abandoned ship. Now the representatives of the occultly oriented true British Establishment, freed from the “united” Europe, will work together with their US brethren, with the brakes off, on the realisation of such a world super-government. Their goal of world domination is, according to Steiner, intended to last centuries4. These centuries, despite all outer appearances, are not yet up. In all the noise of the politics of facades, which also include presidential elections and political slogans, one should not neglect to keep one’s eye on the long-term interests of such groups which, for example, set up the  “socialist experiment” [in Russia in 1917]. Will Trump perhaps be their willing but naïve, new instrument?
One thing is clear: whoever wants to make America “great again” is not yet any servant of mankind.

3    Churchill on 14 May 1947, quoted from https://fassadenkratzer.wordpress.com/2013/11/22/hintergrunde-der-europaischen-integrationsbewegung