From the First World War to Today’s Propaganda War

A Moltke Première in Colmar
On 16 and 17 September a conference was held in Colmar dedicated to Helmuth von Moltke. 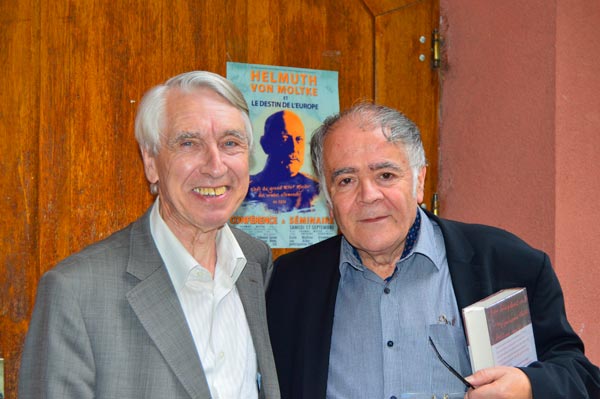 The title was far-reaching: “Helmuth von Moltke et le Destin de l’Europe”.  It was the first official event on the theme of a figure who in France understandably is the object of prejudice and difficulties. The organisers were Antoine Dodrimont and Jean Hèches. On 17 Sept. Dodrimont gave a brilliant overview of the situation in Europe in the weeks before the outbreak of war. He also described the “will for war” in England and France and pre-war propaganda war waged by the Entente against Germany.
In this issue we examine once more the riddle of the Battle of the Marne that the Germans lost and adduce some very significant post-mortem statements by the soul of Moltke, which can fundamentally correct the mostly one-sided picture of Moltke, for example: “an external victory would have meant the utter downfall of the German people” (see p. 8).

the Turkish President, which is a thorn in the side of the other NATO states and especially of the USA.  The deal was done in the framework of the 23rd World Energy Conference, an organisation founded in 1924 by Daniel N. Dunlop. Even if the organisation today has moved away from Dunlop’s far-reaching goals, on its website1 under “About Us/History” there is an extraordinary appreciation of the founder, Dunlop. It ranges over his economic and spiritual activities and describes his plan to prepare an economic order in the sense of Rudolf Steiner’s threefolding impulse. It is to be hoped that Putin’s advisers have taken a look at the background of the organisation in the context of which the Russian and Turkish heads of state were conducting their negotiations. Dunlop’s ideas have in them a power for the future which should gain an understanding especially in today’s Russia.

broadcaster Russia Today (RT)2 (see also the articles by Terry Boardman in TPA Vol.2 No.7 on p. 9 and on p. 11 of the current issue) and closed the broadcaster’s accounts. There was no specific reason given for this sudden move, which was announced as “final”. It is no coincidence that this attempt to shut down the accounts of Russia Today in the UK comes at a time when the western media, including the BBC, are waging a propaganda war against Russia which is no less intense than that waged by the Entente against Germany before and during the First World War.
A few days earlier, President Obama announced the “need” for controls on the Internet, which, he said, often spreads nonsense such as, for example, that “we have never been to the Moon”3 and at the same time he put pressure on Ecuador to cut the Internet connection of Julian Assange, who has taken asylum at the embassy of Ecuador in London. Wikileaks has been releasing very uncomfortable facts about the presidential candidate, Hillary Clinton.
Just as before 1914, there is also “a will for war”, this time against Russia.
It is to be hoped that the attempt to bring the free alternative media to heel will fail, and that the mendacious Anglo-American media war against Putin and Russia Today does not become the prologue to a real war against Russia – a hope which seems less grounded with each passing day.