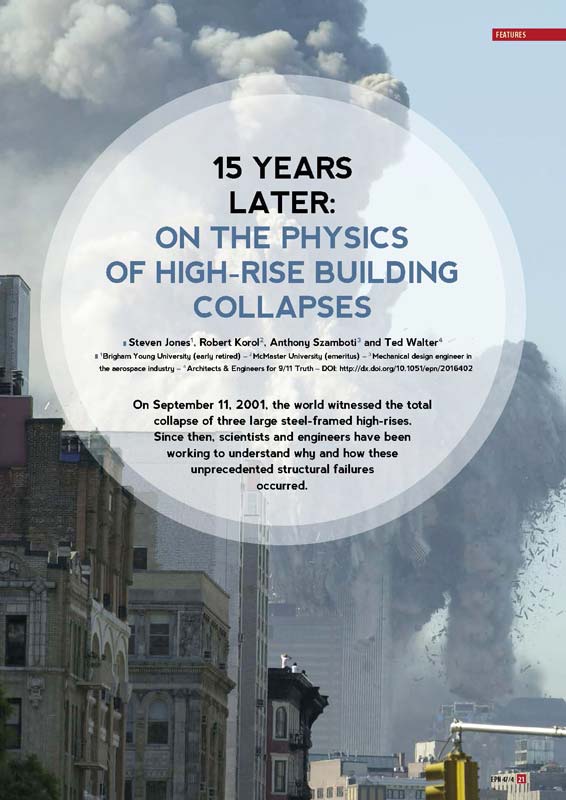 Close to the 15th anniversary of the attacks of 11 September 2001 a very timely article appeared in the magazine Europhysics News at the end of August with the title “15 Years Later – On The Physics Of High-Rise Building Collapses” (www.europhysicsnews.org/articles/epn/pdf/2016/04/epn2016-47-4.pdf).
The article, by Steven Jones, Robert Korol, Anthony Szamboti and Ted Walter, discusses amongst other things the collapse of Building 7 alongside the Twin Towers in New York; this building was not crashed into by any airplanes that started fires. The article states, moreover, that fire has never caused steel-structured buildings to collapse.
It particularly examines the phenomenon that in the first two seconds Building 7 collapsed at free fall speed. This was after a while also accepted by the official examining body NIST. The collapse of Building 7, like that of the Twin Towers, which also suffered collapse at free fall speed, can only be explained by controlled explosions, in which lower floors must first have been made to collapse and the ones above them could then fall without resistance. NIST still claims today that the cause of the collapse of the towers was fire from the aero-engine fuel and concedes that in the case of the analogous collapse of Building 7 it can provide “no full explanation of the total collapse” (p. 25). The authors see it as a “moral imperative” that the investigating authorities finally carry out “a truly scientific and impartial investigation” (p. 26).
This article in a scientific magazine has unleashed a storm of indignation in the mass media. On 16 Sept. the [Swiss] Neue Zürcher Zeitung, in its section “Research and Technology”, sought to bat it away with recourse to the usual CIA-inspired slogan of “conspiracy theories”1, but advanced not a single relevant argument against the authors’ case. At the same time, the newspaper polemicises against a conference event organised in Bern by the Swiss branch of AE911truth (see www.ae911truth.ch). The organisers and the participants were all casually described as “adherents of conspiracy theories”, who had now received some “backing” in the Europhysics article.
On 9 September the Washington Post and the Daily News also carried polemics against the article, which had meanwhile spread widely on Facebook2. Die Welt criticised Jones, one of the authors, because of his Mormon faith.3
Previously, not one respected scientific magazine had dared to publish criticism of the official explanation of 9/11. This has now changed. The dictators of “truth” in the mass media were afraid that all their hopes of maintaining their already 15 year-long, badly soiled cover skins of indoctrination would even now be dashed by scientific arguments. It has not yet happened. Hence the pseudo-scientific furore. This furore unmasks the mendacity which has been practised in relation to the 9/11 event – with all its consequences – from the very beginning. It is comparable to the mendacity which, for almost 100 years, has disguised the Anglo-American string-pullers of the First World War. Let us hope that this time it does not take 100 years until the full truth comes to light.