Church policy as world policy
On 19 June a small group of people found themselves on Mont Sainte Odile in Alsace, France. They commemorated the great individualities Helmuth and Eliza von Moltke, who in the 7th and 8th centuries were incarnated in that place – Eliza von Moltke as St. Odile and Helmuth von Moltke as her brother Hugo. Their father Eticho was later reincarnated as the German Emperor Wilhelm II (r.1888-1918); Wilhelm was presented by the town of Sélestat with a castle not far from Mont Sainte Odile; it was as though a reminder of his incarnation as Eticho. In the 9th century Pope Nicholas I and his adviser, in whom Odile and her brother were incarnate in Rome soon after the time of Odile, made the world-historical decisions which were to separate the West from the East.1
On 19 June – the day of our visit – in 1911, Helmuth von Moltke paid a visit to Mont Sainte Odile. He would have seen the sarcophagi of Odile and Eticho, and also the Chapel of Tears with its image of Pope Leo IX, who was of the family line of Odile and who drew the consequences of the ecclesiastical policy of Pope Nicholas I: the ultimate separation of the Eastern Church from the Western, the Great Schism of 1054.
On the same 19 June this year (2016) – it was Whitsun in the Greek Orthodox Church – the first Orthodox Council for over a thousand years took place on the island of Crete.2
Pope Francis called on the Holy Spirit to protect the Council. Are we now at the beginning of an attempted resolution of the Great Schism by the Catholic Church? Its spirit is alert and pays attention to significant places around the world in terms of etheric geography: in the Odile Chapel there has been a relic of the blood of Pope John Paul II for a few years. Relics, however, belong to the soul constitution of the Middle Ages. The spiritual unification of East and West should not remain in the hands of the Church. It can only be realised by people who want to foster the spirit of the new age.

The British Brexit
A few days later, another event of at least European political dimensions took place: the vote by the British people for Brexit. It is a positive sign that the majority of the British population have turned their backs on an institution which has become the epitome of an anti-national, Kafkaesque form of government by elites. The hollowness of the EU was impressively documented in a video which went the rounds in the weeks and months prior to the referendum in Britain and recorded far higher viewing figures than Prime Minster David Cameron’s propaganda speeches: “Brexit – the Movie” (https://www.brexitthemovie.com).
But here too, the British departure from the EU will not solve Britain’s or the EU’s problems. At most, it will create a free space for a new, really comprehensive economic and social politics, which will not be conducted in closed venues behind the scenes by the “Bilderbergers” and similar anti-democratic bodies. Where are those who will carry forward such a new politics?

Clear-sightedness in Germany
In Germany, happily, critical voices have been raised against NATO’s warmongering on the western borders of Russia. Is NATO seeking to invade, not Poland like Hitler, but Russia, on pretexts at which it is constantly working? The consequences would obviously be catastrophic. Those who perceive these things with clarity include the German Foreign Minister Steinmeier, the writer Rolf Hochhuth, the former Ministers Andreas von Bülow and Willi Wimmer; their comments and points of view on the subject can all be found on the Internet. In October Der Europäer will be carrying an interview with Daniele Ganser, an expert on NATO. 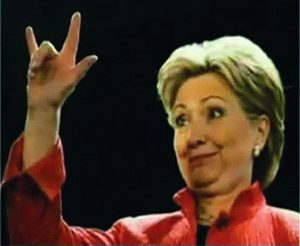 A particularly symptomatic, current political spectacle recently occurred in the USA. Hillary Clinton, on whose public appearances  a great deal of money and attention has been spent, was awarded an honorary membership of Skull & Bones during a ceremony at the elite  Yale University. We have often discussed the dubious machinations of this elite Order which has been in existence since the year of Goethe’s death (1832). Its main concern is to control completely contradictory political directions, by supporting both left-wing as well as right-wing administrations. Those who set up polarities can be the masters of what results from them! For Skull & Bones, Left and Right are only two wings of  one large party, as Gore Vidal once remarked. Mrs Clinton is therefore playing her theatrical role on the puppet stage of the political party spectacle and at the same time fostering more intimate relationships with the actual string-pullers behind the curtain.3

2   albeit without the participation of Russia and Bulgaria.