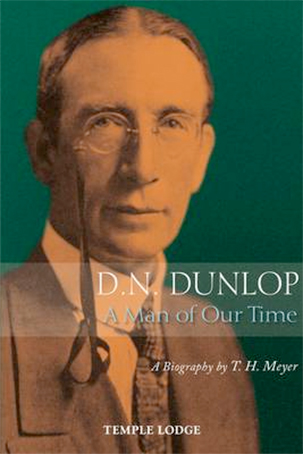 D.N. Dunlop – Theosophist, Anthroposophist, founder of the World Power Conference, personal friend of W.B. Yeats – was a true man of our time, combining remarkable practical capacities in industry and commerce with deep spiritual work and involvement. Born in Scotland in 1868, he lost his mother at the age of 5 and was brought up by his grandfather on the Isle of Arran. Surrounded by neolithic stone circles and monoliths on the island, the young Dunlop had a number of profound spiritual experiences which influenced his later life. With the death of his grandfather, he struggled for material survival whilst devotedly studying occult literature. Moving to Dublin, Dunlop mixed in theosophical circles, becoming a friend of W.B. Yeats and the poet-seer AE, and soon discovered Blavatsky’s Secret Doctrine. He went on to be active within the Irish Theosophical Society, giving numerous lectures and editing a monthly journal. Alongside his esoteric studies, however, Dunlop took a leading position in the British electrical industry as a pioneering organiser, masterminding the first World Power Conference. His life changed through meeting modern spiritual science, Anthroposophy, and its founder Rudolf Steiner in 1922. Dunlop recalled later that „the first meeting brought instant recognition: here is the knower, the Initiate, the bearer of the Spirit to his age.“ His close involvement in the Anthroposophical Movement is thoroughly catalogued in this comprehensive biography: the famous conferences in Penmaenmawr and Torquay; the great friendships with figures such as Eleonor Merry, W.J. Stein and Ita Wegman; Dunlop’s position as Chairman of the Society in Britain; and finally the tragic split and subsequent events in the Anthroposophical Society – a subject which till now has scarcely been written about – leading up to Dunlop’s premature death in 1935.
Afterword by Owen Barfield – Translated by Ian Bass