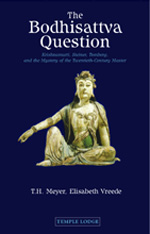 The Theosophists believed that they had discovered the Bodhisattva – a highly developped human individuality – in an Indian boy who grew up to be a teacher of some magnitude, Krishnamurti. Adolf Arenson and Elisabeth Vreede (member of the founding council of the Anthroposophical Society) both independently examined the connection between the Bodhisattva being and the spirituality and mission of Rudolf Steiner – and were lead to diverse conclusions. More recently the suggestions has been made in anthroposophical circles that Valentin Tomberg – a student of anthroposophy who in later life converted to Roman Catholicisms – was the Bodhisattva of the 20th century. These various claims are carefully considered and evaluated in this book.