Absurdities in Great and Small Worlds

If in the greater world a government doesn’t like the result of a referendum, it simply has it carried out again. That happened in June 2008 in Ireland. At the first referendum on the Lisbon Treaty, the treaty was rejected by the people. A (dis)-information campaign then began. Leading circles were satisfied with the result of the second referendum in October 2009.
It’s simpler and less expensive in little Dornach in Switzerland. The members of the Anthroposophical Society voted at this year’s AGM on 24 March by a clear majority not to reaffirm the two Vorstand members Bodo von Plato und Paul Mackay. By 26 March already, the remaining Vorstand members Wittich, Sleigh, Kalkis and Girke had written to “Dear Co-workers at the Goetheanum”: 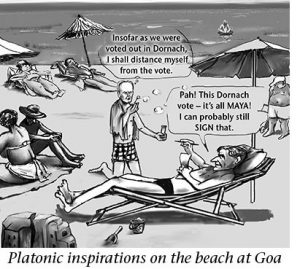 “As you have experienced and heard unfortunately, the majority of the members of the Anthroposophical Society present [at the AGM] rejected the proposal of the Vorstand and of the leadership of the Goetheanum for a further term in office for Paul Mackay and Bodo von Plato. (…) We very much regret this after their 22 years and 17 years of activity on the Vorstand.” Then they stated: “In their co-responsibility for the General Anthroposophical Section, Paul Mackay and Bodo von Plato will continue to belong to the leadership of the Goetheanum. In that regard nothing will change. The two will, with immediate effect, merely no longer be signatories for the Vorstand.”
The General Section is responsible for conducting the “Class”, which has been thoroughly ‘misconducted’ for decades due to spiritual pretensions of leadership. In this disastrous Section, those who have been deselected in unobjectionable proceedings are now to be allowed to continue to have their say! Incidentally, how little it’s a matter of signatures, those in banana republics know just as well as in the small Dornach version.
With this letter, the remainder of the board have given the majority of voters – and also the Swiss law of association – a kicking. In Dornach a “higher” law apparently still applies, to which Albert Steffen already used to appeal, namely, the “law of the Mysteries” …
In the last issue, we reported on karma illusions related to Steiner’s Michael prophecy. It should be added here that at the aforesaid AGM a defender of Paul Mackay was allowed to appear who considers herself to be Ita Wegman. She also told me many years ago in a personal conversation that she regards Paul Mackay as the reincarnated D.N. Dunlop! You may rub your eyes. It’s no dream! Delusion as reality at the Dornach March AGM. Let’s remember that Mackay was responsible for the Dutch advertisements with which the Dutch Society wanted to distance themselves from a possible charge of “racism” in Anthroposophy (“Insofar as there are racial teachings in Steiner, we distance ourselves from them.”). Von Plato already recommended in 2002: “No referring to Rudolf Steiner” so as not to stir up too much trouble with “Anthroposophy”. We reported on it in Der Europäer. – See the cartoon above for further comment.

Back to a major banana republic. The Skripal poisoning case in Salisbury could have unfolded like a script by Alfred Jarry or Eugène Ionesco; it was no less absurd than the events in Dornach. Chemical analysis in a Swiss laboratory in Spiez finally revealed that the poison could not only have been produced in Russia but practically anywhere in the word in a reasonably equipped lab. Was it revenge for British soldiers killed by the Russians? Was the intention just to raise the NATO budget? Or was it an excuse fabricated to bombard Syria on the fatal 14 April? If the latter, then the brazen assumptions and allegations of Russian “guilt” would rather resemble a scheme of Machiavelli’