Lafayette’s Sword and the Sword of Michael 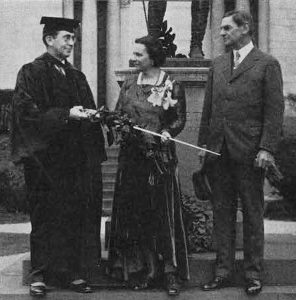 At the beginning of the 1930s something unusual occurred in the USA. Monica von Miltitz (1885-1972) presented the Rector of Lafayette College with a sword¹ that had belonged to the namesake of the college in Pennsylvania.
The General and Marquis de Lafayette (1757-1834) is known as one of the noblest figures of the French Revolution. He was active on both sides of the Atlantic, and indeed first in America, where he took part in the War of Independence. Back in France, he advocated for stronger French participation in this war. He became the embodiment and symbol of Franco-American friendship.
In 1789 he took part in the Estates-General as a representative of the nobility and was appointed Commander of the Paris National Guard. The draft of the French Declaration of the Rights of Man (on the American model) also stems from him. But he did not approve of the evolutionary impulse falling into barbarism. He left his troops, who had joined in treason against the King, at the front with Germany. In crossing the border in the summer of 1792, he was called upon to hand over his sword to the envoy of the German Empire. This envoy was an ancestor of Monica von Miltitz, in whose family Lafayette’s sword was reverently guarded for 140 years. On exactly the 100th anniversary of the founding of Lafayette College in Pennsylvania, she now presented the sword to the College during a solemn ceremony. At the time she said, “in the shortest speech of my life”: “I, a German, present to this American College the sword of a meritorious Frenchman, in the sincere hope that these three great peoples will find their way to mutual goodwill and understanding.”²
Lafayette was an ardent believer in the ideals of the French Revolution – liberty, equality, fraternity. But only the threefolding of the social organism, which is a Michaelic inspiration, can realise these ideals which are otherwise condemned to exist as a mere phrase.
In the time of the incarnation of Ahriman in the West, which has been discussed in Der Europäer more than once, these Michaelic impulses, which were at the basis of the French Revolution, and in which they could only express themselves chaotically, must be taken up and nurtured afresh. According to Steiner, in the USA today, one would first have to work towards the separation of the economy and the state. This does not involve a basic income introduced by the state, which even quite a few “Anthroposophers” are dreaming of these days³.
The presentation of Lafayette’s sword by Monica von Miltitz was a real symbolic act in a supranational, Michaelic spirit, in the way that America really needs now. To reawaken this spirit, we need the sword of Michael, forged of the iron and the gold of spiritualised thinking. One who wishes to pass on this sword to a group of human beings in Germany, France, America or Russia, should be very sure that it is a real Michaelic sword he is holding in his hand – and not just a gold-lacquered wooden sword.
(…)
The true sword of Michael has a much broader radius of action than any rapier or physical sword. It can be handed to anyone of good-will. Whether he wants to take hold of it must be left to his free choice.

1     To refer to the sword, Miltiz actually used the German word “Degen”, which in the 18th-19th centuries meant something like a ‘dress sword’, or ‘small sword’, commonly worn by members of the aristocracy. This was much longer and thinner than a dagger but shorter than a 17th century rapier.

2   The Lafayette Alumnus, Feb. 1932. My thanks to Marcel Frei for informing me of this account. – M. von Miltitz described the episode in “Erinnerungen an das Lafayette-College” [Memories of Lafayette College] in Einige Erinnerungsbilder, undated manuscript printing, p. 8.