The moon landing and the manipulative power of the mass media

In the family in which I grew up there was no television, but we had some good neighbours, so my sister and myself, more often myself, from time to time were allowed to go over to them and watch TV a bit. So on a July evening in 1969 I was sitting once more in the dining room of the friendly couple who accompanied our childhood with much warmth and kindness.
And there and then I was told by the TV reporter that man had just landed on the moon. And what a great achievement this was. I had already built a detector radio, which happened to be tuned to Radio Moscow, and had biked with a friend several times to Basel airport where we admired the first Caravelle jet ever landing on it. Truly fascinating, including the thundering noise of the engines. 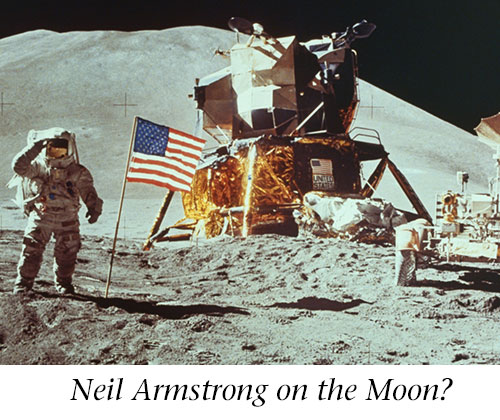 And now I was supposed to be fascinated by the first moon astronauts. All I could see was some little men in white suits and with huge helmets with a reflecting Plexiglas front, walking at the speed you would go when walking through water and occasionally jumping in slow motion up and down on the hilly, sandy ground. I was more puzzled than fascinated. And in a strange way I found the whole scene rather comical than truly impressive.
Over thirty years later I was reading the first critical comments that doubted that the moon landing ever really happened. Again not very impressive. Why should it have been faked? Cui bono? But after 9/11 the moon-landing question took on a new form. If nothing else, it was the living and peaceful proof that you could advertise an event exactly in the way you wished it to be interpreted. The modern mass media’s power of deception had reached a new climax. That was a real achievement. And this “success” emboldened some manipulators of  public opinion to spread an obviously faulty and even ludicrous “conspiracy theory” of a truly terrible and not in the least ludicrous event – 9/11 – to the whole world, consuming the mass media.
9/11 was named the “new Pearl Harbor” on the very day it occurred. Well, its official narrative was as mendacious as the one about the old Pearl Harbor. In both cases the world was misled to believe in a “surprise attack” which was only a surprise for the gullible who did not see behind the scenes. The official Commission Report was justly dubbed “Omission Report” by some critics.
The scapegoat of the old Pearl Harbor was Admiral Kimmel (see p. 26) who died 33 years before 9/11, the new Pearl Harbor. Kimmel was something like the Alfred Dreyfus of the American nation, blamed for a catastrophe others had brewed up.
For the reasons briefly sketched above, we welcome a critical article on the alleged moon landing (see p. 17), clarifying the deeper implication of this modern “myth” for the strengthening of materialism in modern natural science.
The neighbour at whose home I first watched the “moon walkers” had grown up among the people of Dornach and as a girl she had known Rudolf Steiner, as a very friendly man who smiled at the children, sometimes giving them sweets. She witnessed the burning of the Goetheanum when she was about 12. And she had tears of pity in her eyes when, much later, she spoke of this event, full of empathy for this blow against the work and life of the “good man”. She never became an “anthroposophist”, but her faculty of compassion and her sense of truth may have inspired the young neighbour watching the “moon walkers” with the eerie feeling of witnessing some kind of unbelievable comedy or fake.