Gazing across centuries or digital dementia?

Some World Historical Rhythms and Motifs

The year 2016 does not promise to be a calm one, certainly not calmer than 2015. In such times of war, migrations, economic crises and general unrest in human souls it is particularly appropriate to raise our gaze a bit above the horizon that usually just comprises days or months.
In spiritual science we learn to look at larger rhythms. Foremost among them is the rhythm of 33 1/3 years. Any year chosen can be regarded as a germ of impulses, good or bad, which will unfold and finally blossom after 33 1/3 years.1 A strong historical impulse may roll on for another 33 years or even blossom again hundred years after the original event. In the following we enumerate a few examples, which could, of course, be multiplied at length.
33 years ago, in 1983, the first mobile phone was put on the market in the USA; more important maybe: IBM presented the first PC. In 1989 the World Wide Web started with global internet access. All three inventions have become indispensable to modern humanity, but they are also the causes of (dis-)information flooding into human souls and they make it difficult to come to independent individual judgement. There was perhaps never an age better informed and more devoid of real thought. For information and thought are quite different things. Only a thinking consciousness can separate useless information from that which points to essential facts and events. Without such a consciousness the soul simply drowns in a flood of information. A new epidemic disease is emerging: digital dementia.
In November 1983 the German government allowed the installation of Pershing II missiles in the country. Today, Germany is harbouring US bombers with atomic devices and is cooperating in a barbaric multi-national war in Syria without any legitimation. Russia is the only nation fighting ISIS which was asked for help by Syria; this is a bad token for future relations between Germany (and other European states) and Russia.
In 1950 (when the Korea War began) Senator McCarthy started the US anti-communist witch hunt. Today a similar hunt is undertaken against anyone asking questions about key events of our time (like the 9/11 attacks, the Charlie Hebdo incident or the recent Paris attacks last November); such people are labelled “conspiracy theorists”. This term was coined by the former CIA director Allen Dulles to discredit all those who did not swallow “the lone gunman theory” after the Kennedy assassination in 1963. 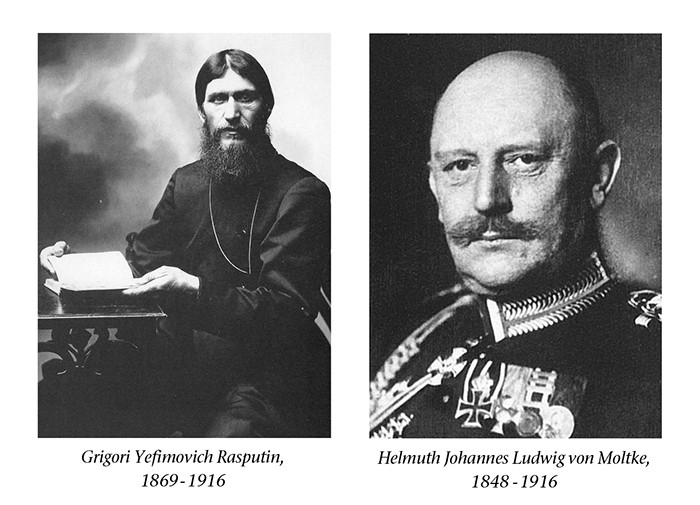 A hundred years ago, two great, though extremely different personalities died. They were involved in the tragic course of the First World War: one of them was Rasputin who tried to convince the Czar that the war was bad for Russia; he was murdered on 30 Dec. 1916 in a plot supervised by a British agent.
In June of the same year, Helmuth von Moltke died in Berlin. He is, next to Rudolf Steiner, the most misunderstood and slandered individual in the history of Europe in the 20th century. Moltke was outstanding in combining the utmost earthly realism with a deep enthusiasm for studying spiritual truth. After his death, this latter aspect of his being blossomed  intensely. His after-death communications are full of insights about the real signs of the times. He knew that Europe and the whole world must wake up to a science of the spirit, or materialism would suffocate human development. He knew that more and more people would be possessed by demonic powers, as in Dante’s “Inferno”, and as we can see them at work in many infernos in our own time. He knew that to recognize these beings spiritual science is indispensable. He knew that the dead live on and can become helpers for the living. And he once stated: “Out of the body, one must direct the gaze of the soul across the centuries. And this gaze across the centuries must be illuminated by the understanding which one has been able to acquire through contemplating ideas of how things relate to one another in the greater dimension of the spirit.”2
Such a larger and spiritualized gaze is without doubt necessary for meeting all the challenges and conflicts of the time to come.